Will You Say a Few Words? 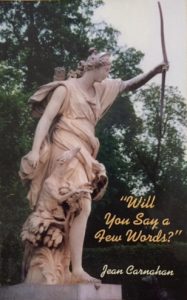 Over the last seven years as First Lady, I have had some wonderful experiences and opportunities that I would never have had otherwise.  Just a few months ago, for instance, I went to Iowa to help First Lady Christy Vilsack work on a Habitat for Humanity building project. I worked alongside the African-American couple who would be first-time home owners.  I got a little sunburn and some sore thumbs, but it was a very rewarding experience.

Currently, I am working to get employers to establish more on-site day care facilities in Missouri.  With more parents working outside the home, there is an increased need for quality, affordable day care.

But never let it be said that those of us in politics don’t get our just reward.  For instance, this year at the State Fair when they had the pig races, one of those cute, little porkers was named for me—Jean Carna-HAM.  In one of her races, Carna-HAM was winner by a snout, having nosed out another runner known as SWILL-ary Rod-HAM Clinton.  It was a wonderful honor.

Mel and I also get to showcase our state to visitors. Two months ago, Missouri hosted the National governors’ Association in St. Louis.  One of the places we took the first ladies was to an inner-city school.  It’s a model of what is being done in computer education to reach at-risk children—those children who have already been identified as potential dropouts because of certain risk factors.

The teacher was very excited as she told s about the computer-centered teaching of these youngsters.  She said that the absentee rate had dropped and student achievement levels improved.  She explained that the kids want to come to school early and to stay after class to work on the computers.

When it was my turn to go into the computer lab, I sat next to a youngster who had a sheet of paper with a number of questions on it that he was to answer by using the computer.

As I sat down I said, “What are you studying?”

Before I could ask, “What’s that?” he explained that it was the study of insects.

“You do like bugs, don’t you?” he asked suspiciously.

I assured him that I did and that I always kept a few around thehouse.

He said, “Do you know what the heaviest insect in the world is?”

Before I could guess, he replied, “It’s the African Goliath beetle.  It weights the same as a quarter pounder.”

I said, “I didn’t know that, but I’ll certainly remember it the next time I’m in McDonalds.”

Well, he was just brimming with knowledge of insect, but I had learned about all I wanted to know.

I said, “Not to change the subject, but can you look on that computer and find out who the Governor is?”

He looked at me somewhat puzzled and said, “I already know who the Governor is.”

So I pushed him one step farther.  I said, “Do you know who the First Lady is?”

He did a few things on the computer and up came a picture of me and Mel.  He looked at the picture for a moment, then he looked over at me and said, “Is that your little sister?”

I tell you this story to let you know that we are going to hold on to these kids.  We are going to save them from dropping out of school or doing drugs.  We’re going to give them a chance to be productive, useful citizens.

To do that depends not only on those computers and those excited teachers, it depends a lot on whom you elect to office.

During the darkest days of World War II, Thornton Wilder wrote a Pulitzer prize-winning play entitled The Skin of Our Teeth.  In the play, mankind is represented by George Antrobus and his family—a prehistoric family facing the threat of an Ice Age glacier.

Antrobus, the hero of the play, cautions his family repeatedly, saying, “Don’t let the fire go out.”

At one point, he makes a heroic statement—one that is a good reminder for us as Democrats standing on the brink of a new century.

He declares, “I know that every good and excellent thing in the world stands moment by moment on the razor-edge of danger and must be fought for, whether it’s field, or a home, or a country,”

Democrats are fighting for those things that are in danger today.  Democrats in Washington are struggling to save Social Security, to strengthen Medicare, to pay down the national debt, to provide a patients’ bill of rights, and to give targeted tax cuts that don’t harm services to the neediest in our society.

These are the things Democrats stand for today.  They have always stood up for hard-working, middle-class families.  I know vthey did for my family.

I was born during the heart of the Depression.  My mother and father both had jobs—they were the lucky ones.  Together they brought home about $30 a week.

To make ends meet, they lived with several other family members and shared expenses.  Together, they held on during those lean years, often gathering around the radio to listen to the words of hope that came from President Franklin Roosevelt.

By the time I was five years old, the country was coming out of the Depression, largely because of the prgrams put into place by President Roosevelt.

It was then that my parents bought their first house.  Neither one of them had ever owned a home before, nor had their parents.  The American dream had not reached us yet.

It was a row house.  Everyone looked like the other—hundreds of them—with a front porch, and a fenced backyard, and three small bedrooms.  I remember the huge billboard posted on the vacant lot across the street.  It read, “New FHA Homes for Sale, $5,990.  No Money Down.  Government Guaranteed Loans.”

My parents bought one of those houses and I grew up in it.  I walked to the public school several blocks away and went to the Baptist church that stood on the corner.  Those three things—home, school, and church—were the foundation of that neighborhood.

My parents paid into Social Security, confident that it would be ther when they needed it because Mr. Roosevelt said that it would.

When the young men in our neighborhood returned from World War II, many of them went to school on the GI Bill.  It was a postwar program that opened up a whole new world for those young people.

Even now, when I attend a college graduation, I get misty-eyed—the way some people do at weddings—because I see the American dream coming true for those graduates and their families.  You can pick them out.  For some, it’s the first time anyone in the family has ever graduated from college and many have done so because of student loans.

Yes, Democrats should be proud of their heritage—proud of who we are and what we have done to deliver the American dream.

Sometimes we forget who our real constituency is as Democrats.  If you ever forget, look back at the 1948 presidential campaign.

They removed 750,000 people from Social Security over Truman’s veto.

They even fought against raising the minimum wage to 75 cents an hour, saying that to do so would expand government and increase taxes.

Does any of this sound familiar?

Harry Truman called them a “do nothing” Congress and the term stuck.

Still things looked pretty bleak for the man who had replaced President Roosevelt and was attempting to run for the office in his own right.  One writer referred to Truman as a “puny figure compared to FDR.”

When Truman stood before the Democratic Convention that year, he said something that a lot of those delegates didn’t really believe in their hearts.  But Harry believed it and he said what he felt.

Truman said, “If farmers don’t give the Democratic Party their support, they will be the most ungrateful people on the face of the earth.”

“Labor has never had but one friend in politics,” he told his audience, “and that’s the Democratic Party.”

Everything pointed to defeat.

The party was divided.  Strom Thurman had bolted the convention to form the Dixicrat Party.  In the north, liberal Democrats lined up with Henry Wallace to form the Progressive Party.

But Harry knew who made up the real constituency of the Democratic Party.  He got on a train during the final months of the campaign and traveled over 30,000 miles, delivering 271 speeches in 36 states.

Still, the news media was unconvinced.  They had it figured out.  Harry was a loser.  One writer labeled Truman “a game little fellow who went down fighting with all he had.”  The republican nominee, Governor Thomas E. Dewey of New York, was a shoe in according to the pollster Thomas Roper.  His organization stopped polling in early September, saying Dewey was as good as elected. There was no more need to poll.

Life magazine blatantly referred to Dewey as the next president.  And, of course, you remember the headlines in the Chicago Tribune.

On the weekend before the election, Truman ended his whistle sstop campaign in St. Louis. He spoke to 50,000 people standing in a drizzling rain.

On Sunday at Kiel Auditorium, he spoke to 12,000.  The ear-splitting ovation could be heard by the 10,000 who stood outside.

He told his audience that he had the Republicans on the run.  This time they believed him.

Standing on stage with his father, the congressman, was boy who was greatly influenced by the message he heard that evening.  The youngster was Mel Carnahan, who would later take on a number of tough battles on his way to the governorship.

He learned a valuable lesson from Harry—as we all did.  For on Election Day, Truman confounded the experts and embarrassed the pollsters when he carried 28 states to Dewey’s 16, winning by two million more votes than Governor Dewey.

Today when the Republicans are once again ready to anoint their favorite for the presidency, let us remember the lessons of 1948.

Let us remember who our constituency is.

Let us remember the power of grassroots work.

And, let us remember who we are.

We are the party that dreams, and dares, and delivers.

We want no part of cynicism, or skepticism, or negativism, or extremism.

Martin Luther King, Jr., once said, “You ought to believe something in life, believe that thing so fervently that you will stand up with it till the end of your days.”

That’s how I feel about the Democratic party.  I believe that’s the way you feel, too.

Don’t let the fire go out.